Since Wednesday I've been spending time between sewing and cutting blocks and pieces for Krimson Khat. It is coming along real nice. I've had to dig deep in my stash for neutrals. Isn't it always neutrals that we run out of? I'm not recording any fabric used this week since I'm not finished with the project, but once I do you'll see 25 1/2 yards reduced from my stash!

I do have a couple of quilts that I picked up this weekend from my quilter, Kerry's Quilting. Kupkake and Flip Flops. 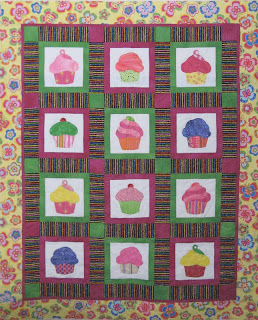 Kupkake has been made for my two and a half years young niece, Morgan. This one was fun to put together. Several of the cupcake blocks were made in an exchange with members of my company's guild (yep we have a company sanctioned guild how cool is that?). I've yet to decide on the fabric for the binding, but I'm leaning towards the pink that's in the quilt now. This one is from the pattern Hey, Cupcake!... by Custom Creations. Kupkake finished at 44" x 55". The quilting pattern is cupcakes each with a candle and loops in white thread throughout. I used a solid yellow fabric for the back allowing the quilting pattern to show up. I have a couple of extra blocks and have been considering a pillow, but instead I may just put the rest together for a charity quilt. 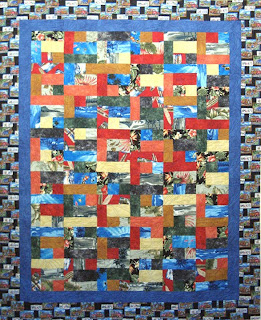 Flip Flops is the completion of a friend's UFO. It was started by her many years ago and abandoned as I recall because of some sewing dilemma involving the size of some of the blocks over the others. Well I decided to put the remaining few blocks together and cut them all to the same size and assemble. I didn't have the original pattern for block placement but this one works. I added the blue inner border to separate it from the business of the blocks and the outter border. It's quilted in blue thread in a flip flop pattern, real cute too! The back is blue with brown yukalaylees scattered about. Flip Flops finished at 64" x 80" and will be donated to Project Linus. I'm sure some teen boy will be thrilled with it.

They are both very nice, I am sure your niece will love the cup cake one.

Love the Kupcake quilt, and yes, your niece will be so oooooo happy to recieve it. I like the stripe sashing, really popped the cupcakes.

Flip flops will be treasured by some teen I am sure. Very nice.