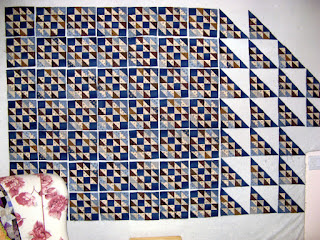 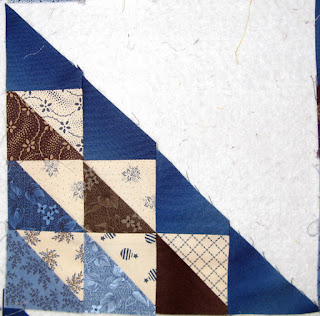 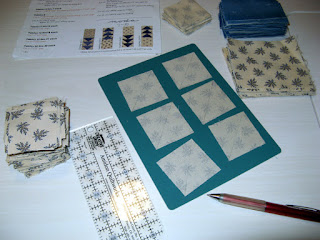 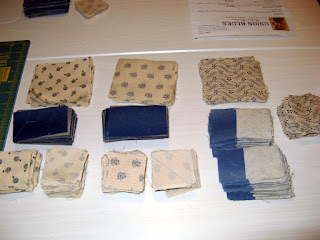 There are four different varieties, 30 each.  These units make up the sashing.  The rest of the week I will be making Flying Geese units.  A big change from Hour Glass units that were in Kutarug.
Posted by kwiltnkats at 12:01 AM 2 comments:
Labels: 2017 UFO, Design Wall, Konstitution 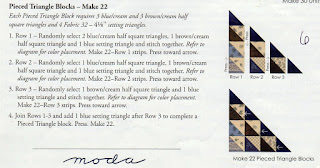 Konstitution is my next project to finish.  It is a 2017 UFO that sat waiting to be stitched until Kutarug was finished.  Konstitution is a project that Kerry and I started in January 2016.  We broke it down into parts and at that time attempted to stitch a part a month.  Yes, both of us set our targets too high!  Kerry did finish hers (scroll down a bit to June: Union Blues), of course she didn't have a project like Kutarug going on!  I will be starting with Part 6 which is to make 22 Pieced Triangle Blocks.  The HSTs are made already with some cutting for the setting triangles.  I may just be on to Part 7 before today is done.
Well some of you know that Kutarug completed this week!  YIPPEE!  Can't wait to share my stash change with you...

I'm done!  It has only taken me since August last year to complete Kutarug (with a little work started in February 2016).

The project is called Winning Combination designed by Tammy Vonderschmitt.  It was in the American Patchwork and Quilting April 2016 magazine.  It published at a size of 59 3/4" x 81 1/4".  Tammy designed this quilt to use up a plethora of 2" square finished HSTs that she received in a swap. 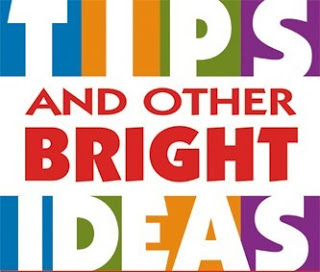 Tammy's idea got stuck in my head.  I too had a plethora of bonus square triangles from various projects that screamed out to be used.  Unlike Tammy's unfinished 3 1/2" pinwheel units, mine would be 2 1/2".  Crazy as this is beginning to sound the project was to be for a king, 103" x 101".  Indeed the stage was set for an overwhelming project.  A little help with the math from Ty and the journey started to make 3,920 1 1/2" unfinished hour glass units for the 980 pinwheel units that would be needed.

The Design Wall with Kassy overseeing...doesn't show the magnitude of Kutarug!  I'm planning on a baptist fan quilting stitch with a neutral thread.  The binding will be the same dark blue.  The back will be whatever is left from the same dark blue.  I don't think it will be enough so I will get creative :).

Thanks to Janet for coming up with the name Kutarug.  More thanks to Debra and Kerry for helping me with some of their plethora of bonus triangles.

Are you as ready as I am to see something different under my needle?
Posted by kwiltnkats at 8:50 AM 6 comments:
Labels: 2017 UFO, Kutarug 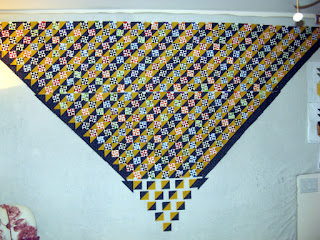 Look what I found today!  On the wall are two row sewn groupings and the last five rows to assemble.  I have all the pinwheel units ready.  A few hours more and Kutarug will be ready for quilting. 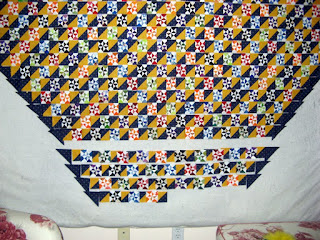 Will this be the week that Kutarug finishes?  Oh my!  I have more gold/blue HSTs to make today that should get me through another few rows.  I'm pretty certain there will still need to be more made before the corner is reached. 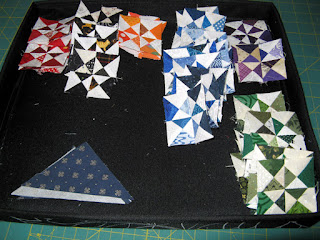 The pinwheel units are thinning out...darn it!  Yesterday I put together more blue and green.  Looks like red, orange, and purple will need to be made before that corner too. 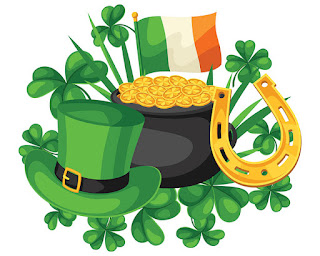 Hope your St. Patrick's Day was a fun one.  I leave you with my Stash Report that just hasn't seen a change for several weeks.  Let's see how the week goes with Kutarug =^.^= 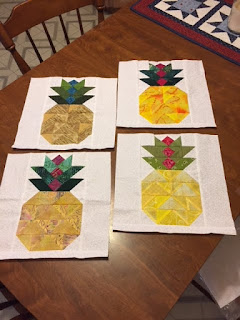 Here are the four Candied Pineapple blocks Mom and I made.  They will be for the quilting retreat we attend in May.  Someone is going to win all that are made by the attendees at the retreat.  Which one do you like?  It is hard to pick a favorite don't you think? 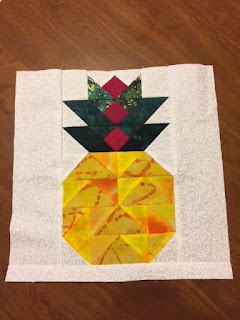 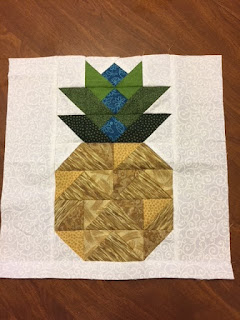 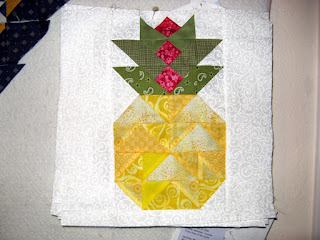 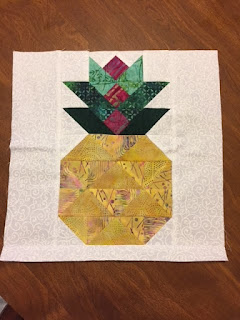 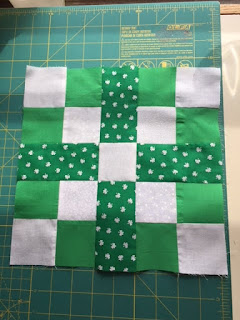 This is the BOM for Sunshine Quilt Guild.  It is up for winner take all at the meeting on Tuesday that I won't be able to attend.  I will be flying back that day from my parents home.  The greens are scraps from Mom's stash so nothing comes from my stash.  I have been making the cute Candied Pineapple block.  I have pulled these fabrics from my stash and rounded some of them off, particularly the greens from Mom's stash.  Mom just loves to have me use her stash...how many of us wouldn't like that!

Monday afternoon my sister returns to her home with me in the passenger seat.  She will drop me off at the airport for my trip home Tuesday afternoon.  We have had a terrific week doing all sorts of things from seeing a movie to rolling crab balls for the local church's biannual fundraising dinner.  I leave my parents with an impossible table puzzle!  So happy to leave it behind...

Check in tomorrow and see the various Candied Pineapple blocks Mom and I have been making. 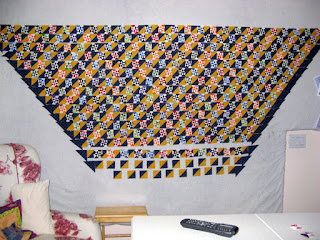 Kutarug today.  That corner is looking closer all the time.  I have enough pinwheel units to get the one row arranged.  It isn't sewn together until there are two rows done.  I find it quicker to stitch two rows at a time. 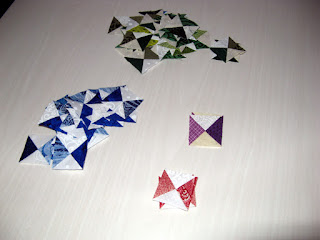 I have been working on more hour glass units.  I think I can do this in my sleep =^.^= 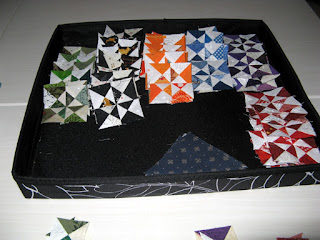 You can see why I was working on blue and green.  Purple will be next when I get back from a visit with my parents.
Posted by kwiltnkats at 12:01 AM 1 comment:
Labels: 2017 UFO, Design Wall, Kutarug 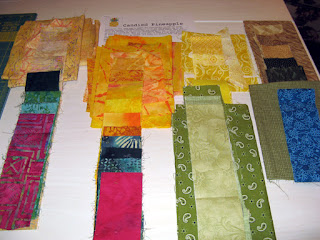 Something new to use up stash.  I rummaged through my 2 1/2" tote to get most of what you see.  There is a rectangle that is a bit larger, but still had it to grab from my stash.  These four groupings will become the Candied Pineapple block.  A winner take all that were made blocks by participants attending this year's Sunshine Quilt Guild's annual retreat.  The retreat takes place in May.  Mom and I will be working on these together when I visit later this week.  (I am being a bit of a renegade with my color combinations...) The stash hasn't changed yet.  Continue working on using it with Kutarug.  More of the gold/blue HSTs are needed as well as green and blue hour glass units for the pinwheels.  Next color getting short on is the purple.  I plan to take these to trim during my lunch break.

Check in tomorrow and see how much there is left for Kutarug =^.^= 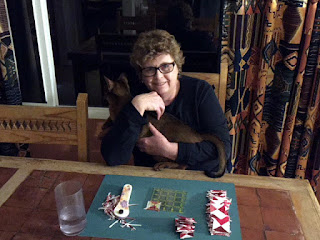 When your baby needs your attention...Kutarug can wait!  I was working on trimming up the red hour glass units until Kosmo just wouldn't take "in a minute" to bear.  He is my love bug for sure.  Kassy was sitting in the seat next to us in case you thought she wasn't include in the love fest.  =^.^=