Here are my 2014 UFO Challenges:
#1 Kranberries.  Bonnie Hunter’s Talking Turkey first appeared in Quiltmaker Magazine 100 Blocks Volume 5 and has since been published in her last book.  By popular demand I coordinated a block swap of the red strings and odd sized 9-patch blocks that make up this design.  The swap started in September and concludes in January 2014.  I’m betting #1 won’t be selected as January’s UFO…keep your fingers crossed for me.


#2 Kaptain Khorous.  Harmony Square by Linda Ballard will be the first workshop I’ll take in 2014.  It is at Road to California Quilt Show to be held on Wednesday.  This will be the first time going to RD2CA at the start of the week.  You see there was a workshop on Tuesday Kerry and I really wanted to take…Preview Night is Wednesday for the Show…so we had to keep occupied in some way on Wednesday!  Happy that Linda had something for us.

#3 Koncentric Konnection.  This one is a design that will take lots of work.  The technique for the paper piecing is new to me and these fabrics aren't one I’d usually work with.  Although the paper piecing and batiks aren't something I’d ever balk at.  I waited forever it seemed for the book to be released by Janice Ellertson and Jodel Yover with the pattern Beauty 'n Check.  Then I hoped to take the class at Road to CA in January 2013, but it filled up too fast.  In February 2013 it was offered at Bits & Pieces through Friendship Quilt Guild and I jumped in.  Three blocks is all I have accomplished with lots more stored in a five gallon zip lock baggie.
#4 Konstituent.  This project called Building Blocks has been sitting in my cupboard for far too long.  I have collected fabric which in gray/yellow/white/black combinations wasn't exactly easy at the time.  It is a block of the month that comes with three FQs in various colorways.  This is the first 12 Month Project released by Sharyn Craig at Cozy Quilt Shop in 2011.  Kerry and I spotted it during the March Cruisin Quilters Run that year.  It is a popular block of the month project that continues to draw in quilters with each new 12 month series released.
#5 Kadence.  Fourth of July by Bonnie Hunter.  A UFO Challenge year wouldn't be the same unless a couple of the many Bonnie Hunter patterns I want to make was on the list.  Bonnie helps us all use our stash and this one will do just that with my overflowing blue storage bin.
#6 Kwetzalcoatl.  Oasis is a design by Sally Frey.  I have no idea where I came across this pattern that I've had on my want to experience list for several years now.  This is another fine project for using up scraps.
#7 Konqueror.  Survivor is a design by Joyce Weeks of Geoff’s Mom Pattern Co.  This is the first San Diego Quilt Show workshop I have taken and the second year workshops have been offered.  I purchased Mourning Grays and added in some fabrics from my stash as well as additional purchases from several area quilt shops.  The last couple of years has me interested in reproduction fabrics.  The workshop was in September 2013 at the San Diego Convention Center. 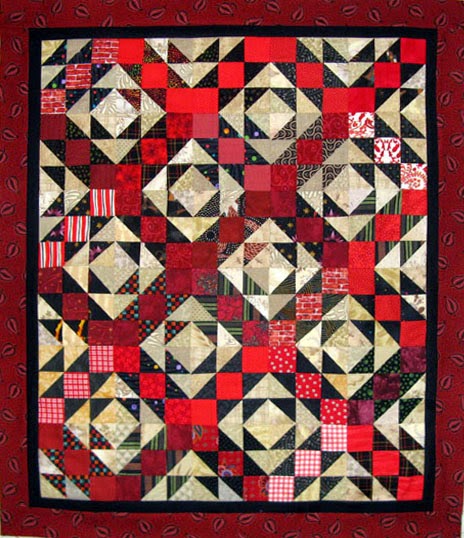 #8 Kings.  Playing with Jacks by Bonnie Hunter.  Did I mention I liked the way Bonnie helped me reduce my stash?  I’m sure you haven’t heard that come from me ever!  One of the storage containers will be overflowing so much so that when #8 is called to be made it’ll allow that container’s lid to close somewhat easier.
#9 Koliding Krosses.  Earth and Sea design created by Cheryl Malkowski for Timeless Treasures.  This came as a free pattern with an order I paced with Keepsake Quilting several years ago.  Another winning pattern for using scraps.
#10 Kolumbia.   Scrappy Star Miniature from this Morning Star Designs by Wendy Gilbert came my way from a stop with Laura Reese at Quilt-in-a-Day a very long time ago.  I'll be using stash with this one too.  Did you know that Columbia was the name of the unofficial national anthem of the United States until its replacement in 1931 by the officially mandated "Star-Spangled Banner"?  It is also the name of one of the NASA Space Shuttles.
#11 Krossings.  Around The Block was the Lakeside Mystery 1 workshop by Linda Ballard at the 2010 Road to California Quilt Show.  If only I had known how fun these mystery workshops were I'd have taken them from the start of my Road to California Quilt Show goings.  They are like a Happy Hour for Quilters starting at 6pm and lasting until midnight. Linda Ballard's patterns can be found at www.letsquilt.com. 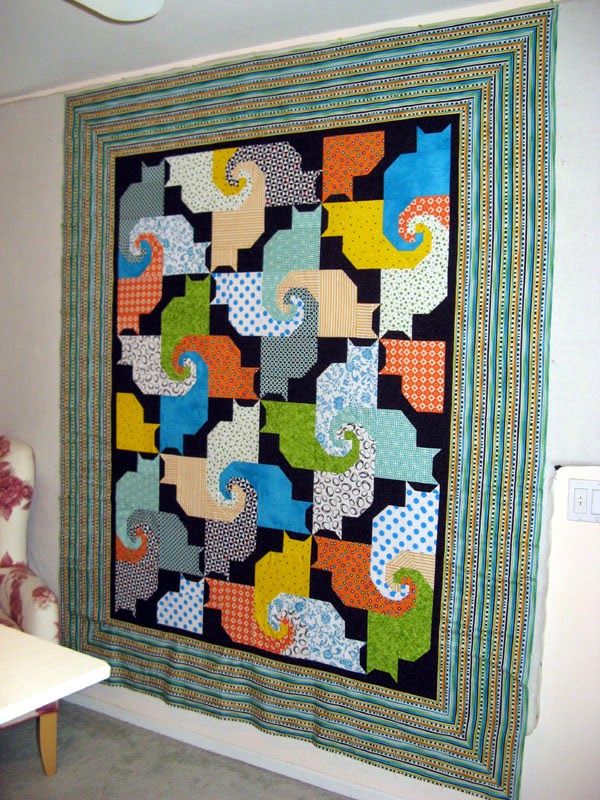 #12 Kurly Kats.  Kool Kats Kwilt, from Northcott Monarch by Patti Carey has for a long time been on my must make list.  What could be better than the snails trail design, using stash and cats combined?
#13 Keltic Krest.  2013 Mystery Celtic Solstice.   Bonnie Hunter has given her readers a mystery annually for several years that starts in November.  One that comes in several steps each week usually with the last step released right around New Years.  Don’t know what she has in store this year for us, but I’m planning on it.

I just about finished the 2011 UFO list in 2013.  Kurry is still in the cupboard.  I am making good progress though; five of them finished during 2013.  I even entered two of them, Kartwheels and Koriander Kompass, in the San Diego and Road to California Quilt Shows.  The good news is that I got all my 2013 UFOs done.  Judy Niemeyer designs sure do kick my butt…Kurry I promise it will be your year!