I've been busy sewing with Judy's Quilt-Along pretty much all day Friday with a break for a few shopping errands in the afternoon.  So here's where I stand just after noon today.

Part 1 was sewing all the 144 HST.  I used Triangles on a Roll for mine.  It took me 55 minutes to sew them and then 30 minutes to cut them apart.  Not sure if Judy's method with Triangulations considered her time at this point...if so Triangles on a Roll won by 5 minutes!  Of course I did need to clip the dog ears, pull the paper, and press yet...so Judy where did your time stop? 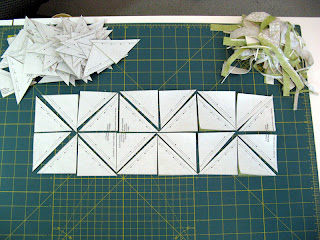 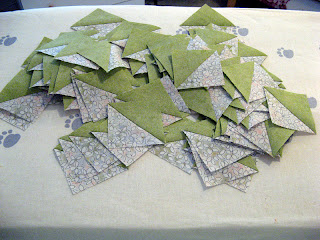 Part 2 was had us make the Nine-Patch that's in the middle of the star.  Eighteen were made. 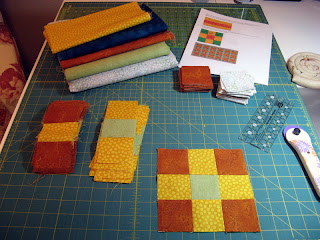 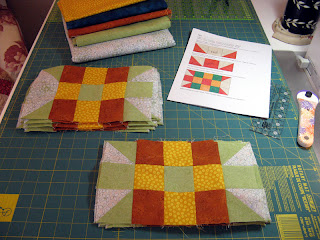 Part 4 is where I finished for lunch.  We added another 2 1/2" piece to the star points and then assembled the three variations of stars in this step.  Four for the stars, six for the perimeter, and the last eight go in the middle. 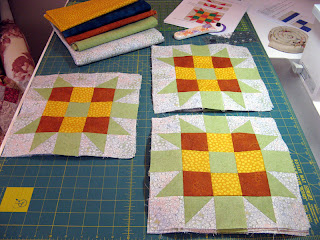 Part 5 starts building the chain that will run through the stars.  I'm looking forward to using my dark dark blue/teal fabric.  With a little luck I should be right on schedule for this project to complete tomorrow!  I'll be watching the SDSU Basketball team at 3pm today and hoping for a win!  Go Aztecs!
Posted by kwiltnkats at 12:28 PM
Labels: Koasting

Looking really good so far - I am following your progress - kinda like doing it myself. Judy C

Wow, doing great. I picked out the colors and that is as far as I got with it. Had to work my day off today, so I got 2 hours sleep and then up at 4am and off to work I went. YUK! Going to go sew my heart out now for Saturday evening, but I don't know if I will start this one or not.

Looking good, you sure do keep your foot to the peddle. Were you pleased with the triangles on the roll. Sounds like it takes alot of time from beginning to the end results??? However they are perfect when done.

Looks like you had a great day with all of this. I am still trying to get UFO #1 completely done and things ready for the retreat and upcoming class so I didn't need another new project to tackle though it does look nice.

Wow! Great progress. Looks like you will be finished today. I am still trying to get March UFO complete.