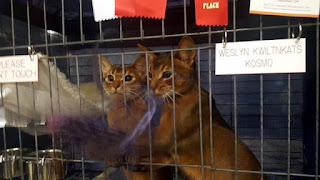 This weekend was set aside for the CFA Food & Water Bowl XXVI at the Del Mar Fair Grounds.  Kosmo and Kassy's first cat show.  They were both entered in the Kitten Category which is for kittens 4-7 months old.  For most of the kittens in this category their first show.  There were six abyssinians entered; four rudy colored, two of each sex along with two fawns both female.  The two rudys not mine were seasoned pros, the female especially.  Astech's Tesuque after this show placed 5th Best Cat Nationally.  Here is what the San Diego Union Tribune wrote about the show. 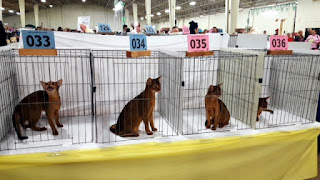 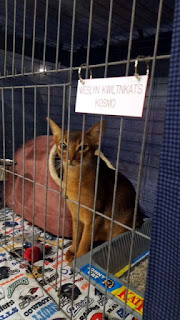 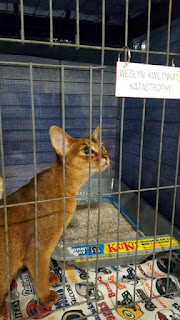 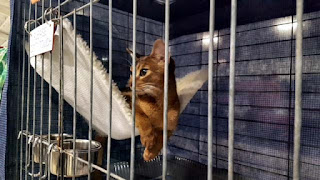 The Southern California Abyssinian Rescue had a both there too in hopes of adoptions.  I am not sure, but I think at least one found a new home. 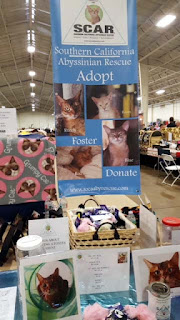 This last one sums up the weekend long show!  Thanks to my friend Kathy for helping me through the weekend and taking the show photos.  Kathy has asked to be Kosmo's God Mother =^.^= 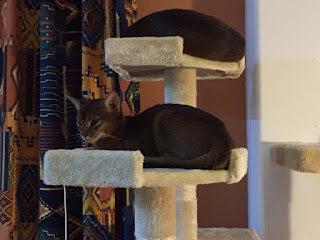 No stash movement this week again.  Soon something is going to change.

super show, a lot of great happenings. Kathy you took excellent photos and thanks for sharing them. A pleasure weekend. Now back to reality. lol

Congratulations on all the ribbons from the Show! The kitties sure did a good job.