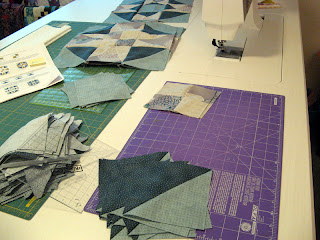 Here we are the first Monday of February...before you know it we'll be through another year.  My goodness time doesn't slow down.  I have been working on my #13 UFO (the project for extra credit).  It is from the Mystery Workshop I took at Road to California Quilt Show last weekend.  The project is called Expect the Unexpected by Karen Sievert.  I have been trimming and making more blocks, but just breaking the surface with what will be needed for the project.  I'm using my Bloc-Loc ruler to square up the HSTs. 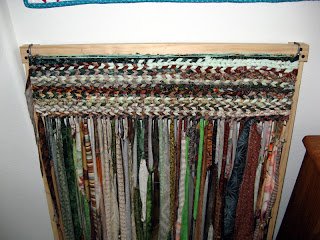 This is the project that has most of my attention.  Something new I am trying to use up some scraps.  The first row is the hardest, but I think I have gotten the hang of it.  You stop after six to eight rows and turn the loom to do the next set of six to eight rows.  Then flip it back and do another six to eight rows continuing the process until the weave meets in the middle.  Apparently there is a tendency for an hour glass shape to come about in the middle if you only worked from one end to the other.  The warp strips (running up and down) are 1 1/4" wide.  The weaving strips (running side to side) are 2 1/2" wide.  I've used anything brown and green for my first rug.  It goes pretty fast and uses 17 yards of fabrics. 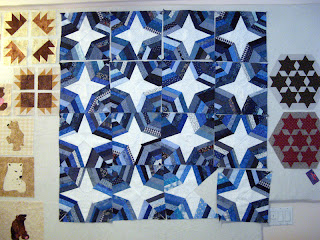 On my Design Wall are three projects.  The middle project is my Mom's.  The first three rows are sewn into blocks.  She's working on the last row now.  The projects on the sides are mine.  A bear block exchange on the left that only needs settings to pull the blocks together and on the right are the first two blocks of the second workshop I took at Road to California Quilt Show, Seven Sisters Simplified.  Lots going on!

For more inspiration see other quilters works through the links at Patchwork Times.  Enjoy your first week of February!

ohhh I think the idea you have to weave your scraps is amazing! very - very cool!

I have seen that hourglass shape develop on a loom like this when the rug was being made by volunteers at a local heritage center. I don't think anyone knew to turn the frame after 6 or 7 rows.
Seventeen yards? That is an expensive rug! : )
Mom's quilt is looking good! : )